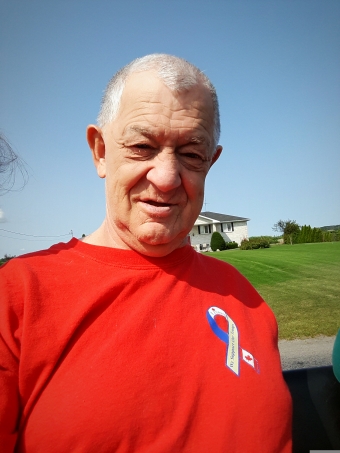 Jim and I have made it our regular routine to go to the bank together and then stop for coffee and a chat every Tuesday morning. A couple of months ago we were asked if we could give someone a ride back to the Resource Centre from the YMCA. No problem. We would go to the YMCA and would sit in the cafe to have a coffee while waiting for a young lady to change after Aqua Zumba. We would watch people swimming in the pool. Jim would say “I can't swim anymore, no, not me, not with my leg”.

Knowing Jim's history having supported him for 15 years I know that he used to swim at his sister Sharon's house in the summer. She has an above ground pool. In the fall of 2013 Jim fell on the back steps of his home and fractured his femur. After a long time in hospital Jim healed and was able to walk again using a walker. In Jim's mind this meant he could never go in the water again.


As much as Jim is always up for a good time, he is not the kind of guy you can just throw into new situations. Particularly ones that may worry him. We continued to go back to the YMCA on Tuesday mornings and watch the pool. I swim with a young lady at the Kiwanis Aquatics Centre on Thursday afternoons. I thought, if I could have Jim see that fully accessible pool and people using wheelchairs/walkers to easily get in, maybe this would allow him to see swimming as a possibility for him in the future.

I asked one of our summer students to ask Jim to go for coffee (his favourite thing to do) but at the Kiwanis Aquatics Centre in the lounge area that overlooks the pool. They came to watch me and this young lady swim a couple of times. Before long Jim was asking to get in the pool.

There were a few last details... things that are important to Jim.

· Jim does not like crowds (as it is summer I called ahead to get the time when there were no summer camps in the pool, only Wednesdays 11-12pm).

· Jim needed to trust who he was with for it to be successful (over time we have developed a trusting relationship), he needed to not feel rushed (give lots of time to get there, changed and in the pool).

· Jim needs to know that his wallet, money and keys are safe (we wrapped them in his towel so they were close by) as well as his clothes (the locker, that the door closes is important).


Jim walked up to the ramp with his walker, held the handrails on both sides and walked into the pool. Jim says that he would like to come again. It is going to take Jim some time to get more comfortable in the water but I think he wants to try. I am hoping that if Jim starts going at the same day/time each week he may start to make friends with some of the other seniors that are regulars there. Perhaps they will go for coffee together one day.