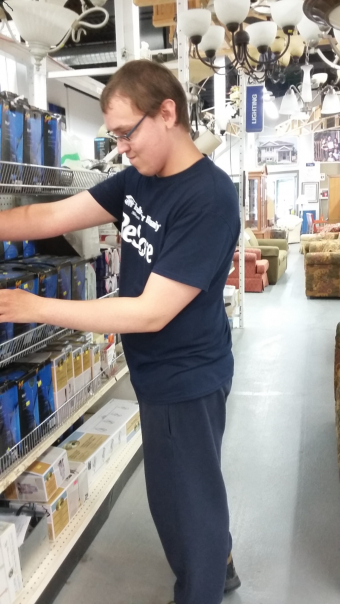 Willie graduated from high school in June 2015. Upon graduating he was not sure what he would like to do. He knew that continuing to practice the Driver’s handbook was something important as he would like to one day get his license. Using the G1 goal was a nice segue to developing a relationship with Willie initially as he really would not speak to me.

Willie has a speech impediment and therefore is reluctant to say much. My guess that most of this reluctance comes from confidence. He would be most comfortable responding to conversation by shrugging his shoulders or simply saying “I don’t know”.

I had told Willie that I will be pushing him a little to have more conversation. I told him I ask a lot of questions in order to get to know him, so shrugging and saying “I don’t know” to everything is going to make this process very hard. Overtime, as Willie has had a chance to get to know me, I see progress in conversation. Each time I am with Willie I talk. I talk about my weekend, my family, my job, even the fact that my car needs repair work. This has really helped to gain trust and that relationship that is so key to supporting people.

Recently Willie decided he would like to get a job. I explained the process to him and stressed that it is important he interview the employment support provider he would like to have. Willie and I met ahead of time and came up with a list of questions. Willie chose who he would like to interview. He was very confident and needed little guidance in this process. I will admit, it took me by surprise, pleasantly. Ultimately he decided on four.

I have no doubt that this young man will be find what makes him happy and be successful. It may take one conversation at a time.

I was very proud of Willie through this process because he did answer questions, not many but a few, with more than one word answers. He tried very hard not to shrug his shoulders. In the end he was very firm on which provider he wanted. He has started with the Employment Provider and I have stepped back from this particular goal.

I share this story because it is often the very small things that make a difference. Although many times people can identify the big things: jobs, volunteer work, joining a club etc. it is the little things that they may not be able to identify that can be the first steps. We sometimes miss the small things that need to be celebrated. I admit I have had to encourage Willie at times but because we were able to develop a relationship slowly and on his terms, this was okay.