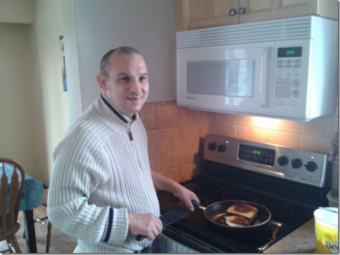 When Mainstream first met with Lenny’s family to share the vision of Lenny living on his own, his family became very excited at the idea of him having ownership of his own space. They immediately began to share our vision and talked about what type of setting would work best for him. They recognized some of the safety concerns with the plan but did not see them as barriers, simply as issues to address along the way.

Lenny moved to Mainstream from an institution several years ago. His family had expressed amazement on several occasions at how far he had come in ways they could never have imagined. They saw our plan as a way to create as many opportunities as possible for Lenny to learn and grow and they said that they truly had no idea how far he could go.

The staff began focusing on the things that Len was already able to do for himself and building on those. Recently, Lenny made a grilled cheese sandwich. He didn’t do it completely on his own from start to finish but he did every step he could on his own with a bit of help here and there.

When Lenny was finished, he didn’t want to show the staff what he had done, he wanted to show his housemate Wayne. Wayne often makes Lenny’s sandwich for him when he’s making his own. This was the first time Lenny had done it for himself and he needed Wayne to see that he could do it.