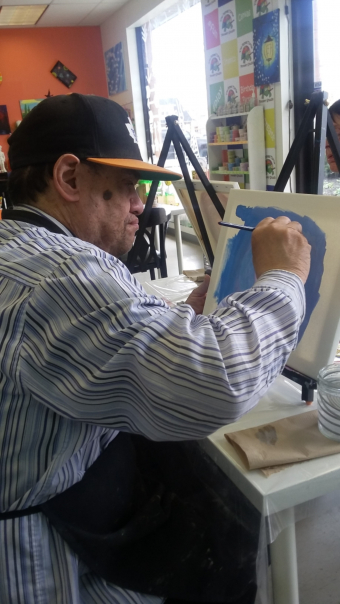 I thought I would take Wayne to the Painted Turtle without actually asking him if he wanted to go. I know this doesn’t sound like a good way to support someone but sometimes it is. I did this because most of the time, when we ask Wayne to try something new, he says ‘no thanks’. Instead of asking him, I just drove him there to see what would happen. I know Wayne liked colouring but was not sure whether he would like, or even try, painting. We met Sue who runs the Painted Turtle. She was very supportive and genuinely wanted to know some of the things that Wayne liked such as Johnny Cash, the CN Tower and his family. At first, as Wayne often does, he walked around the place until he felt secure. I wasn’t sure he would even sit down as Wayne is not known for sitting down for short periods of time let alone long ones, especially in unfamiliar places. Sue was very helpful in getting Wayne to feel comfortable and supporting him while he decided what to paint. He did eventually sit down and paint. Since that first trip Wayne has painted a few pieces representing his family, the CN Tower and Johnny Cash. Each time Wayne painted, he focused for an hour at a time which is unusual for him. After a few visits, we thought he might be comfortable on his own for a few minutes. I casually said “I’ll be right back” and left him alone with his art. You never know until you try and sometimes you just have a take a deep breath and jump right in.